Day 01 : Delhi - Shimla
Arrive Delhi airport / railway station and drive to Shimla (350 Kms. / 08 Hrs.) the former summer capital of British India, set amidst the snow capped Shivalik Mountains which offers some of the most stunning views of the mighty Himalayas. Enroute visit Pinjore Gardens or Ropeway at Timber Trail, Parwanoo. Arrive and check into the hotel. Evening free to stroll on The Mall and the famous Ridge. Ridge is famous for its stunning vistas of the valley and the Christ Church which is the most photographed landmark of Shimla. Overnight in the hotel.

Day 02 : Shiml- Manali
After Breakfast Excursion to Kufri. Kufri is famous for its Himalayan National Park, Poney and Yak Ride and One can see the endless Himalayan Panorama from Kufri, after lunch sightseeing of various places in and around. Shimla mosques built in (1830), Vice regal Lodge built in (1885), Christ Church built in (1844), The Gaiety Theatre- the first beauty contest of world was supposed to start (1887), Then Move to Manali Over Night Joureny.

Day 03 : Manali
After Check in the Manali hotel and move for a half day sightseeing of places in and around Manali, Like Hadimba temple, Manu temple, Vashisht Bath, Van Vihar and evening shopping at the local market.

Day 04 : Manali - Rohtang Pass/ Solang Valley
Excursion to Rohtang Pass. Situated at an altitude of 3979 mtrs above sea level and 51 kms outside Manali is the mighty Rohtang Pass - the gateway to Lahaul-Spiti valley. It affords a wide panoramic view of the mountains. Here one sees the majesty of the mountains at its height and splendour. At the top of the pass the air seems to glitter against the snow as you look down over herringboned ridges into the Lahaul valley. Evening at Leisure.

Day 05 : Manali to Chandigarh (320 Kms.)
Checkout from the hotel drive to Chandigarh. Chandigarh is the 1st planned modern city of India designed by the French architect Le Corbusier. The city was named after the mother goddess of power, Chandi, whose temple Chandimandu is a feature of the new city. Evening free for shopping and own activities.

Day 07 : Agra to Delhi
After breakfast sightseeing of the places in Agra. Like Agra Fort: Built by the great Emperor Akbar in 1565 A.D., the fort is a masterpiece of design and construction. Within the fort are a number of exquisite buildings, including the Moti Masjid, Diwane-i-Am, Diwane-i-Khas and Musamman Burj, where the Emperor Shah Jahan died in imprisonment, besides Jahangir's Palace, Khaas Mahal and the Sheesh Mahal and drive to Delhi on the way sightseeing of Mathura and Brindavan and drop at Railway station/airport. 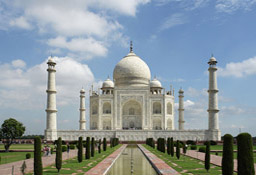