The Renuka Lake (660 m) is regarded as the embodimezznt of Renukaji, the wife of sage Jamadagini and mother of Parshuram, one of the ten Avtars of Lord Vishnu. Shaped like a profile of a woman, the lake has the circumference of 2.5 km and is the largest in Himachal. This placid stretch of water is fed by underground springs and the surrounding hills are padded by lush forests that support a large variety of plant and animal life. Boating and trekking are the additional attractions of Renukaji, whose natural beauty has to be seen to be believed. This is perfect year around destination that beckons every traveler.

Access : Renukaji is connected by road. It is 315 km from Delhi. The nearest rail head is at Ambala (95 km) Dehradun (105km) and Chandigarh (95 km). The nearest airports are at Chandigarh and Dehradun. Taxis/buses are available for Renukaji at all places.

Climate : In winter, the climate is pleasant and light woolens are suggested. Summer temperature are high and cottons are recommended.

Surrounded by sal forest and on the banks of river Yamuna, the historic town of Paonta Sahib (350m) was founded by the Tenth Sikh guru, Guru Gobind Singh. When only 16 years old, the Guru left Anandpur Sahib and on the invitation of Raja Maidini Prakash of Sirmour, lived at this beautiful spot for over four years. The historic gurudwara commemorates his stay and interestingly the water of the Yamuna fall silent below this which happened at the Guru's behest. The word Paonta means 'Space for a foothold'.

Access :Paonta Sahib is connected by road. From Renukaji. It is 81 km via Nahan and 60 km via Rajban. From Dehradun, it is 44 km. The closest railheads are at Ambala and Dehradun. The nearest airports are at Chandigarh and Dehradun. Taxis/buses are available for Paonta Sahib at all places.

Climate :In winter, the temperature can hover around freezing point when heavy woolens are required. Summer temperature are high and cottons are recommended. 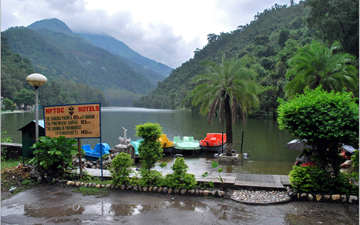