Situated on the left bank of river Beas at an altitude of 1851m, Naggar - an ancient town commands extensive views, especially to the North West of the valley. Naggar was the former capital of Kullu. It was founded by Raja Visudhpal and continued as a headquarters of the State until the capital was transferred to Sultanpur (Kullu) by Jagat Singh in 1460 A.D. Today this ancient and beautiful Palace is a popular tourist spot.

Climate : In winter heavy woolens are recommended and in summers the temperature is pleasant and cottons are suggested.

Treks : The valley is a nucleus to several trek routes. Some major ones are over the Chanderkhani Pass to Malana village, over the Jalori Pass to Shimla, and over the Pin Parvati Pass to Sarahan. The river Beas offers excellent opportunities for white water rafting.

The historic town of Mandi (800m) is situated along the banks of river Beas. It has long been an important commercial centre, and the sage Mandava is said to have meditated here. Mandi is renowned for its 81 temples and their enormous range of fine carving. Mandi is known as the 'Kashi of the Hills'. The town also has remains of old palaces and notable examples of colonial architecture. Mandi is the gateway to the Kullu valley and acts as a base for several exciting excursions.

Access :The nearest airport at Bhunter is 59 km. The broad-gauge railhead is at Pathankot at a distance of 210 km. From Pathankot the narrow gauge railway connects Joginder Nagar, 56 km from Mandi. From Chandigarh one can drive directly to Mandi via Ropar and Bilaspur, the distance is 203 km The drive takes around 5 hours. Luxury / Volvo coaches from Delhi and Shimla bound for Kullu - Manali travel via Mandi.

Climate :In winter, temperatures can hover around freezing point when heavy woolens are required. During summer, the climate is hot and cottons are recommended. 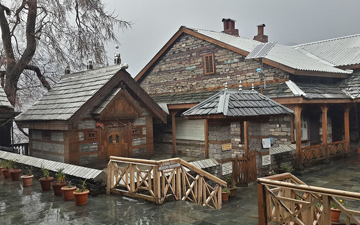