Kullu (1220m) was once known as Kulanthapitha - the end of the habitable world. Beyond rose the forbidding heights of the Greater Himalaya, and by the banks of the shining river Beas lay the fabled Silver Valley. Kullu got its first motorable access only after independence. The long centuries of seclusion have however allowed the area to retain a considerable measures of its traditional charm. Here is the core of an intricate web of numerous valleys, each of which is a visual delight and seems more beautiful than the other.

The Silver Valley has nature's treasures that lie carelessly scattered as flowers. This wealth nestles by every tree in the splendid forests, bursts forth in the blooms and in the fruit of every orchard. Here are riches which cannot be measured and echo down the ages with the words of every myth and ancient legend and glow in the warm smiles of its gentle people. There is pleasure in every step you take in these enchanted valleys and in every gurgle you hear in the clear mountain streams.

Access :The airport at Bhunter is 10 km from Kullu, where taxis and buses are available. By road, the distance from Delhi is 530 km , Shimla - 240 km. From Delhi, HPTDC Luxury and Volvo coaches ply to Kullu daily. During tourist season there is a daily luxury coach to Shimla.

Climate :In winter, the temperature gets quite low when heavy woolens are required. It is pleasant in summer and cottons are recommended.

At 1737 m, on the right bank of river Parvati. this place is famous for hot sulphur springs revered by both Hindus and Sikhs pilgrims. Thousand, of pilgrims take dip in holy water. The water of the spring is also said to have curative value which cures many skin diseases. According to an ancient saying Manikaran is also connected with Lord Shiva and His divine concert Parvati.

Climate : In winter, the temperature gets quite low when heavy woolens are required. It is pleasant in summer and cottons are recommended. 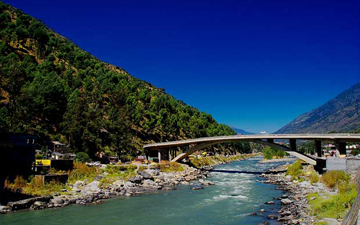