Ancient legend speak of a time when demons lorded over the Himalayan mountains and harassed the gods. Led by Lord Vishnu, the gods decided to destroy them. The gods focused their strengths in an huge flame which rose from the earth. From the fire, a young girl look birth. She is regarded as Adishakti the first 'Shakti'.

Known as Sati or Parvati, she grew up in the house of Prajapati Daksha and later became the consort of Lord Shiva. Once her father insulted Lord Shiva and unable to accept this, she killed herself. When Lord Shiva heard of his wife's death his rage knew no bounds and holding Sati's body he began stalking the three worlds. The other gods trembled before His wrath and appealed to Lord Vishnu for help. Lord Vishnu let fly a volley of arrows which struck Sati's body and severed it to pieces. At the places where the pieces fell, the fifty-one sacred Shaktipeeths came into being.

Sati's tongue fell at Jwalaji (610m) and the goddess is manifest as tiny flame that burns flawless blue through fissures in the age-old rock. Even the Pandavas are regarded to have visited this sacred place.

Access : The airport at Gaggal is 46 km from Jwalamukhi. The closest broad gauge railhead is at Pathankot, 123 km away. Taxis and buses are available at both places. From Delhi the road distance is 473 km and from Shimla is 212 km.

Climate : In winter, the climate is cold but pleasant when woolens are required. During summer the temperature is hot and cottons are recommended.

Sati's feet fell at Chintpurni (940m) and the devout come here to leave their worries and pray for boons. The legend goes that the temple came into being after the goddess revealed herself to Maya Dass, an ardent devotee. The temple is built around the Devi's pindi. Her image depicts her without a head, it is said that she cut it of to assuage the blood thirst of her companions. And hence the name, Chinnimastika Devi - 'The Goddess without a Head'.

Access : The closest railhead is at Hoshiarpur in Punjab 43 km away. From Jwalamukhi, the distance is 35 km. Taxis and buses are available at both places.

Climate : In winter, the climate is cold when woolens are required. It is hot in summer and cottons are recommended.

Chronicled in the Durga Sapt-Shati, the story goes that on the orders of Shamb and Ni-Shamb, two demons tried to harass the goddess Ambika. Enraged, Ambika knitted her brows and from the folds a horrifying from of Kali emerged. After a great battle, the goddess Kali slew the two demons, Chand and Mund. Delighted by Kali's achievement, Ambika declared that she would now be worshipped here as Chamunda a combination of the demons names. Chamunda Devi temple is at height of 1000m.

Access :The closest airport is at Gaggle, 28 km away. The nearest railhead on the narrow guage line is at Moranda near Palampur, 30 km. Taxis and buses are available at both places. By road, Chamunda Devi is 15 km from Dharamsala and 55 km from Jwalamukhi.

Climate : In winter, the temperature can get quite cold when woolens are required. It is hot in summer and cottons are recommended. 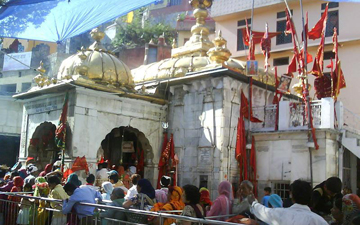