In western Himachal Pradesh, the hill station of Dalhousie is full of old world charm and holds lingering echos of the Raj era. It covers an area of 14 sq. km. and is built on five hills - Kathlog, Patreyn, Tehra, Bakrota and Balun. It is named after the British governor General of the 19th century, Lord Dalhousie. The town's average height is 2036 m, and is surrounded by varied vegetation - pines, deodars, oaks and flowering rhododendron. Dalhousie has charming colonial architecture, including some beautiful churches. Its location presents panoramic views of the plains and like a long silver line, the river Ravi twists and turns below Dalhousie. The spectacular snow-covered Dhauladhar mountains are also visible form this enchanting town.

Access : Dalhousie is 485 km by road from Delhi and 52 km from Chamba. The closest railhead is Pathankot, 80 km away. The airport at Gaggal in Kangra is at a distance of 135 km . Taxis and buses are easily available from these places.

Climate : In winter, the temperature can drop to freezing point when heavy woolens are required. The summer temperature are mild and light woolens / cottons are recommended.

Chamba town (915m). stands on the right bank of the river Ravi. As a former princely State, it is one of the oldest in the century and dates back to the sixth century. It is well known for its splendid architecture and a base for numerous excursions. It is also the district headquarters.

Access : Chamba is connected by road and is 580 km from Delhi. It is 24 km from Khajjiar, Dalhousie via Khajjair, is 56 km. The closest railhead is at Pathankot, 118 km away. The airport at Gaggal in Kangra is at a distance of 170 km. Taxis/buses are available from these places.

Climate : In winter, the temperature gets very low because of cold winds, when heavy woolens are required. It is hot in summer and the temperature rises up to 38 degrees

Often called India's Switzerland, the exquisite glade of Khajjiar (1960m) has a circumference of about 5 km. Along its fringes, thick forests of deodar climb the slopes, the snow-line rests above these woods. At Khajjiar there is a 12th century temple dedicated to KhajjI Nag. Within the temple are life size wooden images of the five Pandav brothers.

Access : Khajjiar is connected by road and is 23 km from Dalhousie and 26 km from Chamba. It is 520 km from Delhi. The closest railhead is at Pathankot, 120 km. The airport at Gaggal in Kangra is at a distance of 180 km. Taxis and buses are available from all these places.

Climate : In winter, the temperature hovers around freezing point with snowfall and heavy woolens are required. In summer, the climate is mild and light woolens / cottons are recommended. 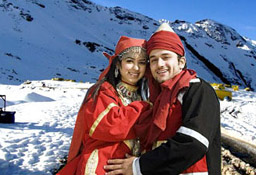